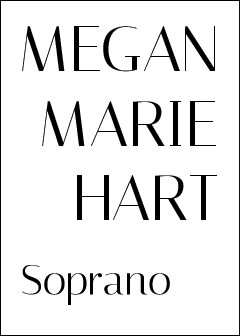 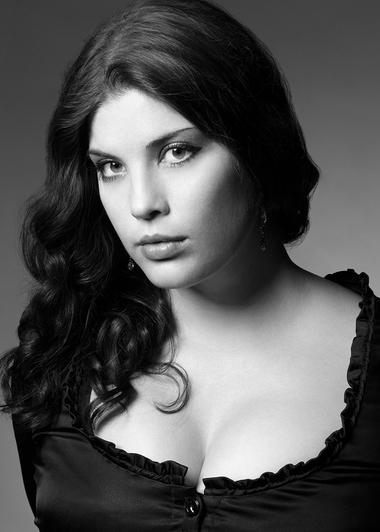 ​​​Praised for her “Pleasing, lustrous voice with depth and power,” spinto soprano Megan Marie Hart is known for her compelling vocal expression and dramatic stage presence. In the  2022/23 season she will debut Cio-Cio-San in Madama Butterlfy with Landestheater Detmold, return to her beloved roles of Donna Anna in Don Giovanni and Tatjana in Eugene Onegin, and make her debut as Liù in Turandot at the Staatstheater Darmstadt.

In the 2021/22 season Megan Marie Hart sang Elsa in Lohengrin, Mimì in La bohème, and Madeleine in Ball im Savoy at Staatstheater Darmstadt, and reprised the title heroine in Tosca with the Schlossfestspiele Zwingenberg festival.

In 2021 Ms. Hart presented her recital Famous Musicians of Jewish Origin as the opening event for the “1700 Jahre Jüdisches Leben in Deutschland” celebration in Darmstadt, followed by further performances at the Darmstadt synagogue and Staatstheater Darmstadt. She continued her participation with the Jüdisches Leben in Deutschland festival at Hessisches Landesmuseum Darmstadt, discussing the life and works of renowned painter Max Liebermann; joining her as panelists were Prof. Dr. Mirjam Wenzel and Dr. Martin Faass, Daniel Neumann, and the esteemed artist Boaz Kaizman.

From 2015 to 2020 she was in the ensemble of the Landestheater Detmold, where she sang the title roles in Aida, Tosca and Luisa Miller, Mimì in La bohème, Chrysothemis in Elektra, Gilda in Rigoletto, Marguerite in Faust, Fiordiligi in Così fan tutte, Rosalinde in Die Fledermaus, Arminda in Mozart’s Die Gärtnerin aus Liebe, Elle in La voix humaine, and Sylva Varescu in Die Csárdásfürstin.

Previously, she sang the role of Konstanze in Die Entführung aus dem Serail with the Bühnen der Stadt Gera, Donna Anna in Zomeropera Belgium’s Don Giovanni, and returned to Annapolis Opera to sing Gilda in Rigoletto.

Other favorite roles include the title role in Alcina, Almirena in Rinaldo, Sibyl Vane in The Picture of Dorian Gray, Amina in La Sonnambula, Fiordiligi in Così fan tutte, Blanche in Dialogues des Carmélites, and the Countess Almaviva in Le nozze di Figaro.

Ms. Hart made her Carnegie Hall debut in a recital of Liszt Songs with the Marilyn Horne Legacy at Carnegie Hall, and won First Place at the Liederkranz Foundation Competition. She joined the New York City Opera roster to cover Marie in Rufus Wainwright's opera Prima Donna, made her Annapolis Opera debut as Juliette in Roméo et Juliette, and appeared at Union Avenue Opera as Wellgunde in Das Rheingold.

As a three-year resident artist with the prestigious Seattle Opera Young Artists Program, she performed the roles of Zerbinetta in Ariadne auf Naxos, Tatyana in Eugene Onegin, Tytania in A Midsummer Night’s Dream, Gretel in Hänsel und Gretel, Lauretta in Gianni Schicchi, and the title role in Rita.

Equally at home in the concert hall, Ms. Hart has sung in countless galas and oratorios, including the soprano solos in Mahler’s 2nd Symphony, in Elias, Carmina Burana, Suppé’s Requiem, Beethoven’s 9th Symphony, and in Strauss’ Vier letzte Lieder.

As a concert soloist, Ms. Hart has performed with the Seattle Symphony under the baton of Marvin Hamlisch, and in a televised performance of Beethoven’s 9th Symphony for the Dalai Lama and Desmond Tutu. She appeared in concert with Rufus Wainwright and the Oregon Symphony. She has collaborated extensively with Music of Remembrance, a Jewish chamber ensemble, performing works by Holocaust era composers and poets.

Ms. Hart earned both her Bachelors and Masters degrees at Oberlin Conservatory, and her Professional Studies Certificate at Manhattan School of Music.

Megan Marie Hart is a student of Marilyn Horne.